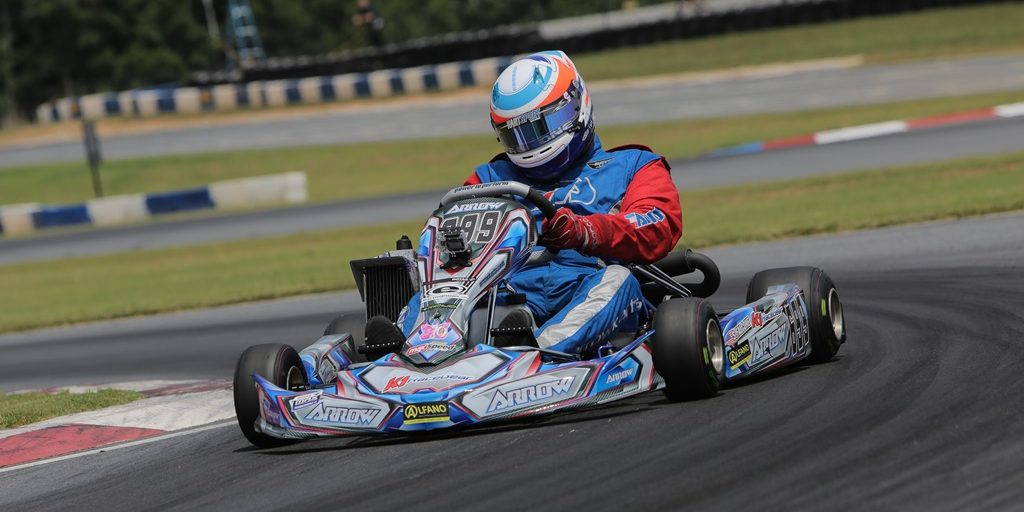 Diego Pelosi (FA Kart) and Tyler Brooks (Kosmic) filled out the front row as the 25-kart field took the green flag to begin heat two. Pelosi held the top spot with Scott Falcone (Arrow) breaking up the Ryan Perry Motorsports teammates to begin the opening lap. Rob Maier (Tony Kart) and Scott Roberts (Tony Kart) filled out the early top five as the front three broke away some. Brooks put the pressure on Falcone lap two, allowing Maier to close back up and Pelosi to pull away some. Roberts and Max Papis (Tony Kart) were also able to close up to make it six drivers in the lead pack. Lap three, Brooks took over the second spot from Falcone and began pressuring Pelosi out front. Fighting between Maier and Roberts in turn eight allowed Papis to jump to fourth with Maier falling down the order more a few corners later. Lap six, Pelosi pulled off at turn nine as his chain snapped off completely and put him on the sidelines in the 23rd position. This moved Brooks to the lead and Falcone second, pressured by Papis. The top three remained unchanged to the checkered flag with Brooks earning his second win with Falcone and Papis right there. Roberts finished fourth with Randy Sampson (Arrow) fifth and Andy Seesemann (Arrow) sixth.

Heat three began with the outside line with a huge jump on the inside line with Roberts moving from sixth on the grid to first in the opening corner with Pelosi slotted into second over Brooks, Corey Mitchell (Kosmic) and Falcone. Roberts continued out front with shuffling taking place all over the track, including Pelosi dropping a number of spots. Falcone put himself back into second place after the halfway mark with Mitchell third, Pelosi back to fourth and Brooks fifth. They ran that way until the final lap with Pelosi diving inside of Mitchell in turn nine, bringing Brooks with him. Roberts would cross the line first but was assessed a three-second penalty for a start infraction. This moved Falcone to the win with Pelosi in second. Brooks was behind him, but given 10 seconds for his start infraction. That placed him down to 12th with Mitchell fourth and John Bonanno (Kosmic) fifth in the final order.

Falcone will pace the field to the green flag in the Prefinal with Brooks holding the second spot once again. Roberts is set to go from third with Papis fourth and Pelosi fifth.