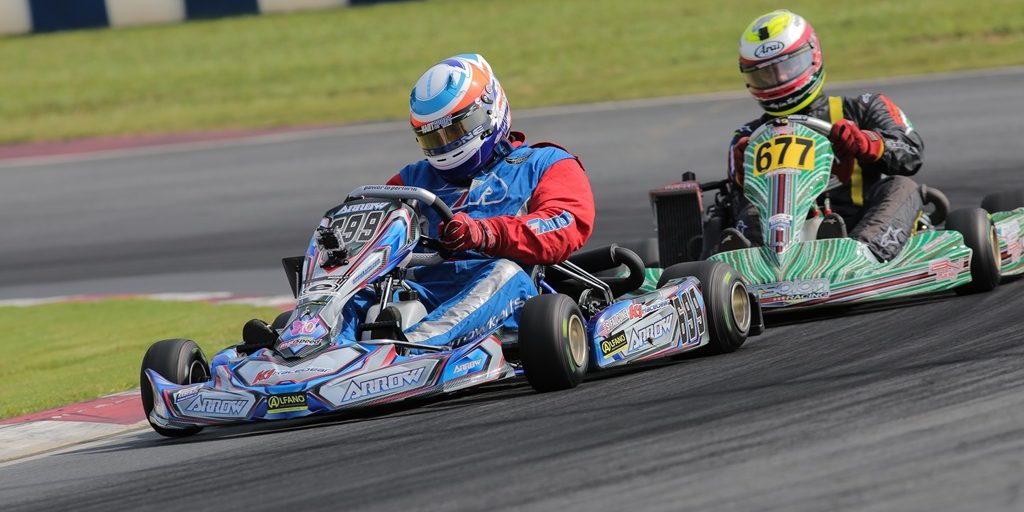 Starting on the front row for the Masters Prefinal was Scott Falcone (Arrow) and Tyler Brooks (Tony Kart). Falcone progressively gain spots in the heat races, winning the third, while Brooks scored two wins, but a starting violation dropped him down the order in heat three which cost him the pole position. Falcone got the jump, bringing them down quick as the top two slotted in place. Max Papis (Tony Kart) and Scott Roberts (Tony Kart) slotted in behind with Andy Seesemann (Arrow) in front of top qualifier Diego Pelosi (FA Kart). Lap two, contact was happening all over, including Seesemann getting shoved off by Pelosi out of turn nine. The top two stayed glued as Papis felt pressure from Roberts, about six tenths off the time by the leaders. Lap six, Papis was finally getting comfortable with the new Mojo tires and the conditions of the track, dropping the quickest lap of the race, about one tenth quicker than the leaders who were out front by 1.7 seconds. Papis continued to cut into the leaders advantage as he cut it within a second as only four laps remained. Lap 11, Papis laid down another fast lap of the race, knock the gap down to just a few kart lengths. With Brooks now feeling Papis on his bumper, Falcone put a couple lengths out front. On the final lap, the top three closed right together with Falcone making a slight error. Brooks looked at Falcone, but docked back in on the exit of turn nine. At the stripe, it was Falcone with the win over Brooks and Papis, with Roberts closing in late. Rob Maier (Tony Kart) completed the top-five, leading Corey Mitchell (Kosmic) and Pelosi.

Falcone and Brooks once again paced the field to the green flag for the final race of the event to decide this year’s champion. Falcone got the jump with Papis coming through with the second spot. Contact in turn nine sent Brooks and Roberts off the track, collecting some back markers with more, including Maier the following lap. This allowed John Bonanno (Kosmic) up to the third spot with Pelosi fourth and Mitchell fifth and Michael Auriemma (Tony Kart) trailing the lead group. Lap three, Papis took the lead for the first time and proceeded to put down some fast laps to extend a five to six kart length lead. The front group remain unchanged through the halfway mark as Papis continued to stretch his lead over Falcone and maintain it to the checkered flag for his first ever Rotax Grand Nationals victory. Falcone settled for second, but the KartSport North America driver was awarded the Rotax Grand Finals ticket to compete in DD2 Masters as Papis was ineligible for the prize. Bonanno held on to cross the line third, but was removed from the results following tech. This put Pelosi on the podium with Mitchell and Auriemma rounding out the top-five.