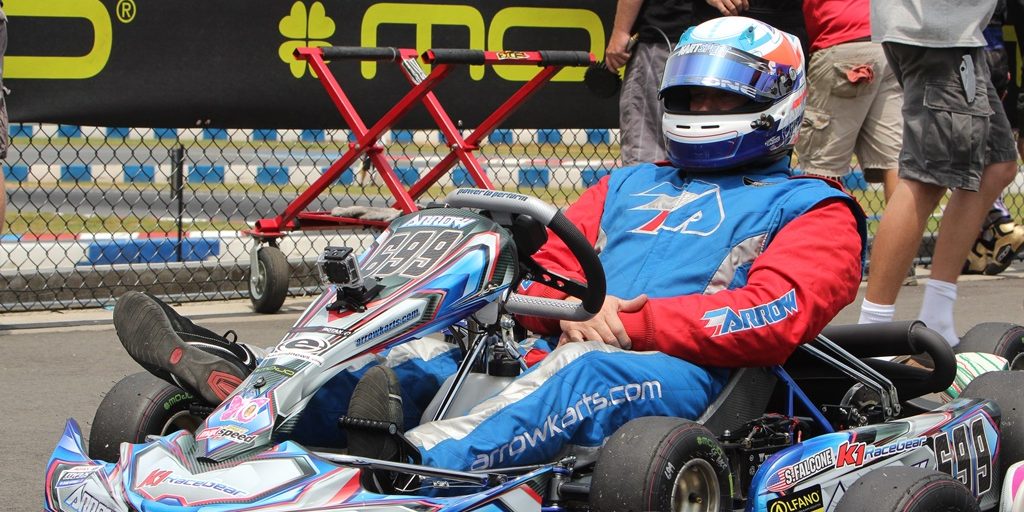 The qualifying session for the Masters Max group was a tight one as four drivers finished the session within a tenth of a second – similar to what we saw in the final practice on Wednesday. Diego Pelosi (FA Kart) was able to lock down a quick time early on, posting a 49.157-second lap. Others tried to better the time, but were just unable to drop below it to award Pelosi the pole position for the heat races. Ryan Perry Motorsports teammate Tyler Brooks (Tony Kart) made it a 1-2 for the SoCal operation as he was just 62 thousandths off the fast time. Yesterday’s quick driver Scott Falcone (Arrow) was third with Corey Mitchell (Kosmic) and Rob Maier (Tony Kart) completing the fast-five.

The RPM teammates led the field to the green flag with Pelosi getting the jump and Falcone splitting them up as Brooks went back to third. Maier moved into fourth with Randy Sampson (Arrow) filling out the early top-five. The top nine drivers made up the lead group with Papis into sixth, Mitchell seventh, Scott Roberts (Tony Kart) eighth and Andy Seesemann (Arrow) ninth. Falcone held the second spot briefly until Brooks returned to the spot. They ran static until the two laps to go signal when Brooks made his move on Pelosi into turn one. Falcone tried in turn three, giving Brooks space out front. After 10 laps, Brooks took the win over Pelosi and Falcone. Maier edged out Sampson for the fourth spot with Papis close behind in sixth. Mitchell was pulled off track for a dragging bumper, moving Roberts to seventh and Seesemann to eighth.