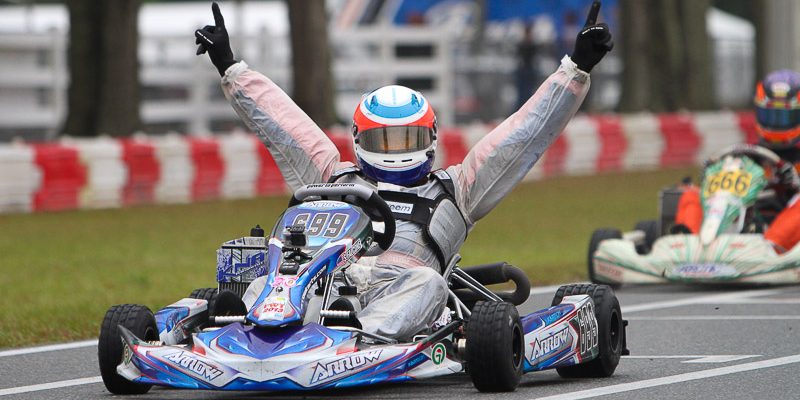 In MAX Masters, Derek Wang (USA) would use the pole position he earned on Friday to lead the pre-final and take a 1.494 second win over Patricio Larrea (Ecuador). At the start of the Masters final, Patricio Larrea grabbed the lead with Derek Wang giving pursuit. For several laps it looked as though Larrea would take the last victory of the year for the MAX Masters class in the FWT.

Then, seemingly out of nowhere, Scott Falcone (USA) came storming to the front. First he dispatched Wang and set out after Larrea. Lap-after-lap Falcone looked for an opening to get by the Ecuadorian. He managed to get alongside a couple times, but the going was very slick off line and some of the puddles on the backside kept him from passing. Finally, with a handful of laps to go, Falcone found a way past and never looked back. At the stripe, it was Falcone over Larrea who had a comfortable lead over Wang. On the podium, Scott Falcone once again brought the Stars-and-Stripes to celebrate the victory.

When asked about his standing in the points earlier in the week, Derek Wang said he had no idea; he just comes to the track to win. Apparently that’s a good strategy because that’s exactly how he became the 2013 Florida Winter Tour MAX Masters champion. Joining Derek on the championship podium for an American sweep were Scott Falcone in second and Jason Bell in third.