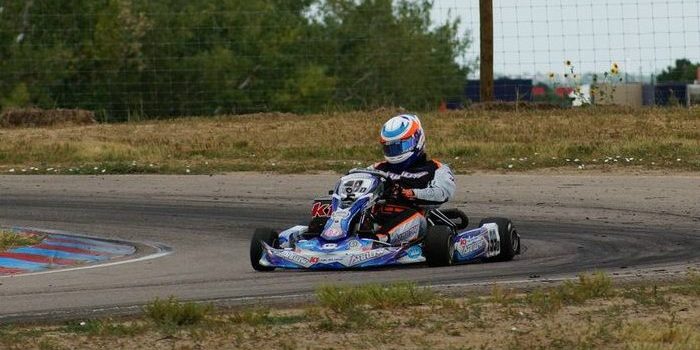 This past weekend (August 23-25) the Rocky Mountain ProKart Challenge ended its 2013 season with its sixth and seventh rounds being contested at The Track at Centennial, south of Denver, Colorado. Superkarts! USA and US Rotax Max Challenge racers from Utah, Wyoming, and all corners of Colorado pulled through the gates of TTAC for the first time in the series’ young four-year history. The technical yet fast 20-corner circuit, with an added threat of rain during both main events, challenged drivers all weekend.

Racing together on the track were the combined classes of TaG Senior, TaG Master, TaG Junior and Rotax Junior. Scott Falcone was the man to beat in TaG Master, as he recorded a perfect score on the weekend and never strayed from the top spot. Behind him on Saturday was Wright Hugus in second and Russ Johnson in third. Sunday, Falcone drove to a dominant win with Hugus in second again, and Mike Urban finishing his season with a third place finish. Falcone left Centennial with the TaG Master championship, adding to his already very impressive season. In TaG Senior, point leader and eventual champion Jason Dempster was on the property but not entered to race, leaving reigning champion Brandon Southwick to race Charlie Craig for the weekend. On Saturday, Craig swept the day, leaving Southwick to finish in second. Craig got the jump over Southwick in qualifying on Sunday, but a DNF in the first heat would put Southwick ahead. In the main, Southwick made it only about 50 feet off pit road before his kart shut down and would not re-fire. Craig would go on to earn his second victory of the weekend to end up second in the standings behind Dempster.