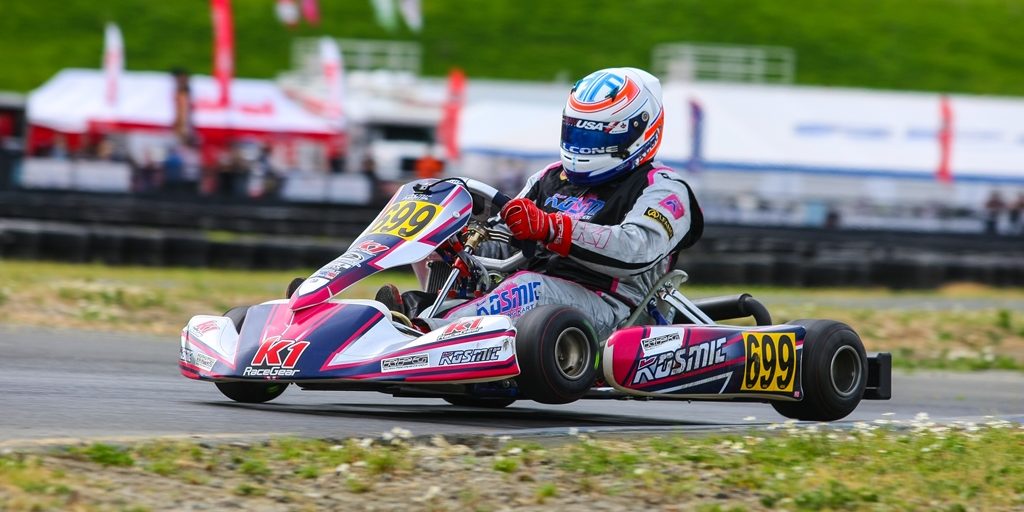 Needing to have a perfect weekend for a chance at the title, Scott Falcone started it off Friday with the fast time in final practice. The Rolison Performance Group / Kosmic driver backed it up Saturday morning in the qualifying session with a 51.754-second lap to secure the five bonus points for fast time. Championship leader Paul Bonilla (Tony Kart) was second with Billy Cleavelin (CRG) – making his first COTA start – in the third spot. 2014 US Rotax Grand Nationals champion Ken Maxfield (Arrow) improved to fourth, dropping championship contender John Crow (Birel) down to fifth.

Falcone went wire-to-wire in the 17-lap Prefinal, pressured throughout the race. Bonilla was shuffled back to fifth through the opening corner, with Cleavelin into second and Crow third. Crow eventually worked past Cleavelin for second and closed up on Falcone. Unable to make a move, Falcone remained strong and scored the win by 1.7 seconds at the checkered. Crow was second with Bonilla around Cleavelin for third. Maxfield was in the top-five, but retired with a lose of his brakes, moving Chad Wallace (Kosmic) up to fifth.

In a performance seen before from the Colorado driver, Falcone completed his best day of the 2015 season with a victory in the Final, completing the sweep on the day. Falcone got away early with Crow and Bonilla fighting for second. Posting fast lap of the race, Falcone drove his Kosmic to a 3.4-second advantage after 25 laps. Bonilla was able to better Crow for second, as the two championship contenders recorded their worst point total of the five rounds thus far, making their fight a ‘start from scratch’ tomorrow with five points separating the two. Maxfield bounced back from his troubles in the Prefinal to drive up to fourth ahead of Wallace.