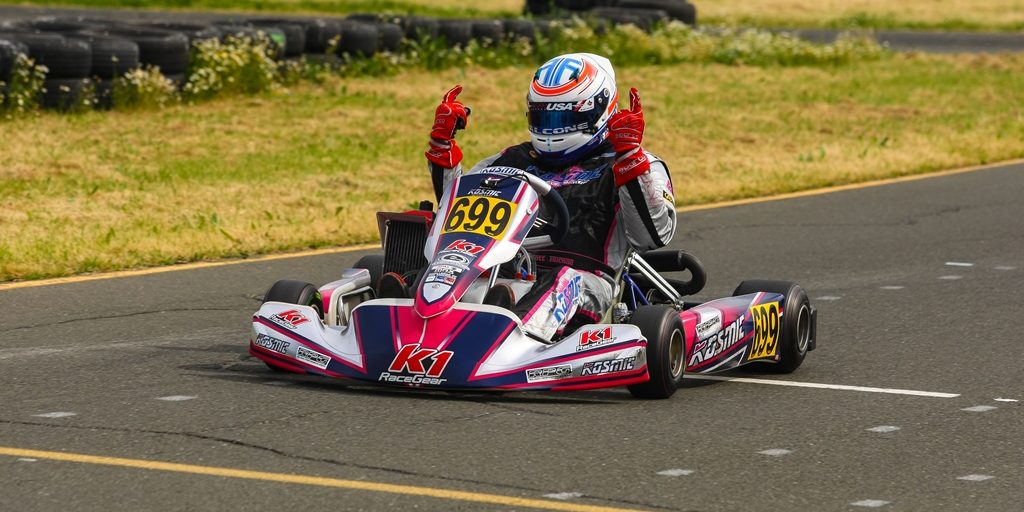 There is no question Scott Falcone came for victory here in Sonoma, sweeping the action on Saturday and beginning Sunday in the same fashion. The Rolison Performance Group / Kosmic driver locked up the pole position early in qualifying, posting a 51.662-second lap to once again hold a two tenths advantage over the rest of the field. Paul Bonilla (Tony Kart) charged late, ending up second with Chad Wallace earning his best qualifying effort of the series to put RPG first and third. John Crow (Birel) was fourth with Billy Cleavelin (CRG) fifth.

The Prefinal for the Masters group was an interesting 17 laps from start to finish. Falcone led the field to the green with Bonilla slow at the drop of the green. The field shuffled around him going into the opening corner, until he spun around and collected the second half of the field. This allowed Falcone a clear path at the front with Cleavelin and Crow slotting in behind. They ran that way until lap 15 when Falcone slowed coming out of the turn nine, with his chain off from a broken rear sprocket. This put Cleavelin into the lead and gave the CRG-USA driver the win, with Crow unable to take the position away and settling for second place points. Bonilla fought back to battle for what was now third with Wallace and Roman Alekseenkov (Tony Kart), making his first Challenge start. Wallace was able to get away while Alekseenkov held off the championship leader in the final corners for fourth. Wallace however was penalized five positions for an airbox infraction, moving everyone up a position and him back to the eighth spot on the main event grid.

Alekseenkov elected to not compete in the main event, moving the contenders all right there together on the grid. When the green flag waved, Falcone quickly attacked on Cleavelin with Crow and Bonilla falling in behind. Falcone was too strong, posting quick laps early to get away from Cleavelin and the rest of the field. With the Prefinal the only blemish on his weekend record, Falcone scored his second victory of the weekend and ended the championship chase in the third spot. Bonilla was able to record the fast lap of the race, working past Cleavelin and scoring the second spot to lock up the championship and his first ever ticket to the Rotax Grand Finals. Cleavelin ran third in his first COTA start with Crow finishing fourth and ending the year second in points. 2014 US Rotax Grand Nationals champion Ken Maxfield (Arrow) ran fifth.