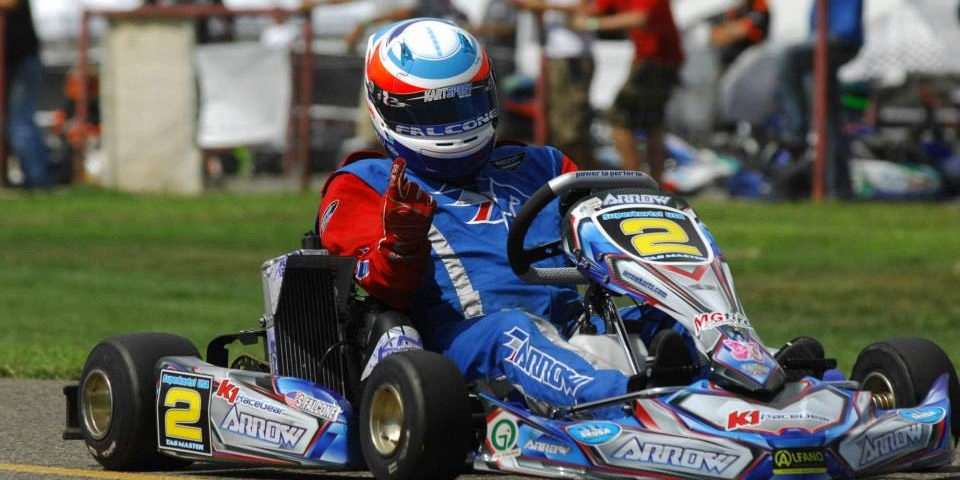 It was the familiar names at the top of the order in the qualifying session for the TaG Master group. Inaugural Pro Tour champion Ethan Wilson (Tony Kart) ended the session as the quickest driver, piloting his Phil Giebler Racing entry powered by a Rok TT engine to a 55.861-second lap. Chuck Gafrarar (Parolin) was second in the order with Pro Tour new comers Anthony Honeywell (Tony Kart) and Brent Lyman (Parolin) filling out the second row for the heat races. 2011 champ Brian McHattie (Kosmic) was fifth with current point leader Scott Falcone (Arrow) in sixth, the top Rotax in the field with the fast-five a mix of Rok and Leopard engines. Wilson however lost the pole position after measuring too wide at the rear of the kart, dropping him to the tail of the field for the opening heat race to put Gafrarar and Honeywell on the front row.

Racing in TaG Masters proved that no one engine would dominate the weekend in Grand Junction. After Gafrarar scored the pole in qualifying aboard his Leopard, McHattie would steal the show in heat one as he took the lead from Gafrarar in the turn six hairpin at the end of the back stretch. McHattie and his Rok powerplant drove to the heat one win ahead of a very close Gafrarar. Falcone drove to third with Honeywell back to fourth ahead of Jim Russell Jr. (Parolin).

The mercury began to rise in the second heat between the front three of McHattie, Gafrarar and Falcone. After Gafrarar took the lead from McHattie in turn six on the opening lap, McHattie fell from the offense to playing defense, trying to keep second place from an aggressive Falcone. On the exit of turn 10 on lap three, Falcone and McHattie both went wide and McHattie spun into the dirt and lost the lead pack. Falcone would go on to get around Gafrarar scoring the heat two win, and the pole position for the main. Honeywell advanced to third with Wilson rebounding to place fourth, recording the fast lap of the race, while Paul Bonilla (Italkart) was fifth.

In the main event, after pulling away from the pack, Gafrarar, Falcone and McHattie ran nose to tail the entire race. Contact in the opening corner dropped Honeywell out of the race and a broken header would put sour note on Wilson’s day, taking him out of contention as well. Gafrarar ran second to Falcone the entire race until five laps to go when McHattie made his move for P2. McHattie then turned his attention on Falcone, setting up for what could have been an interesting battle. The two drivers however ran clean and respectable, with Falcone giving McHattie just enough room and the DB Motorsports driver not forcing any outrageous passing attempts on the KartSport North America driver. At the checkered flag, Falcone would score the victory for his second of the seasons with McHattie and Gafrarar completing the podium. Bonilla would drive to fourth, a few seconds back of the leaders, while Russell bounced back from a DNF in heat two and placed fifth.