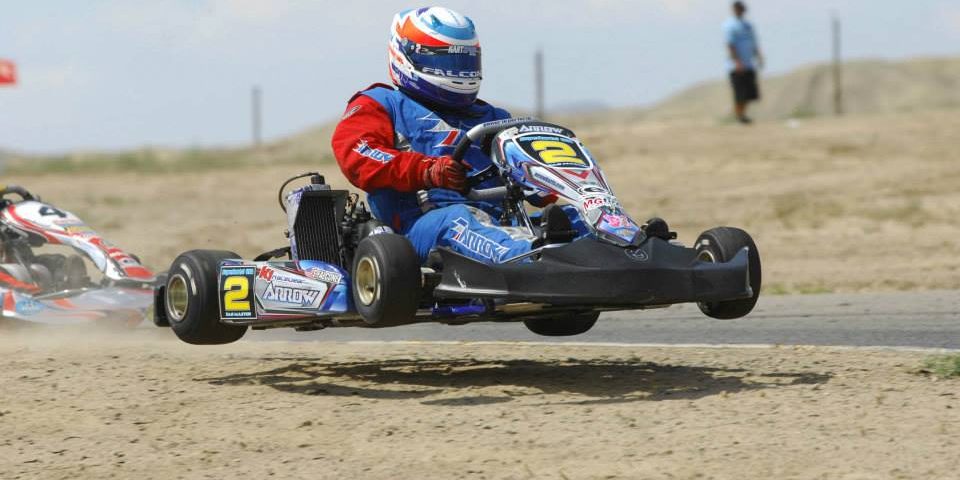 On the second day of any two-day race weekend, there are always the same two story lines. For one driver, staying on top and keeping the momentum is the goal. For every other driver in the field, day two means a shot at redemption. In the TaG Masters class, the driver looking to rebound from an up and down day on Saturday was Brian McHattie. The DB Motorsports/Exprit driver laid down the fastest lap early in qualifying and stayed there through the length of the session. Behind McHattie was teammate Anthony Honeywell (Tony Kart). Keeping his momentum rolling from round three the day before was Scott Falcone as he put his Arrow third on the grid. Also looking to rebound from a very tough day on Saturday that was filled with mechanical issues was Ethan Wilson (FA Kart) as he qualified fourth with Saturday frontrunner Chuck Gafrarar slotting his Parolin fifth on the starting grid.

The first heat race saw Falcone’s chances at a repeat win be diminished after contact ripped his nose cone off the kart in the opening corners and was pulled off the track. The path to redemption continued for Wilson as he ran in the lead three kart pack the entire race doing his best to hang with McHattie and Honeywell. The heat one win would go to McHattie, with Honeywell finishing in second. Behind the front three, a good race was taking place between defending champion Paul Bonilla (Italkart) and the Russell Karting/Parolin teammates of Chuck Gafrarar and Jim Russell Jr. An impressive pass allowed Russell to get around Bonilla for fourth place that opened the door for Gafrarar to get by Bonilla before the checkered flag also.

The second heat race main was all McHattie. From the start of the race to the checkered flag, McHattie led the way driving to nearly a three-second gap over second place. The last laps of the race saw the patience and respect demonstrated by the drivers. Wilson led a five-kart train that included Gafrarar, Bonilla, Honeywell and Russell Jr. McHattie made a statement in the second heat as he led the whole way en route to his second heat win of the day. Doing his best to erase a day of mechanical issues the day before, Wilson drove ahead of Honeywell to a second place finish. Gafrarar slipped by Honeywell at the halfway point as he drove to a third place finish in the second heat. Honeywell was left to race with Bonilla for the fourth spot. Bonilla, who was relatively quiet on Saturday threw his number one national plate into the fight in the second heat race. Bonilla ran Honeywell hard for the final five laps, actually passing and holding the fourth position for lap six. Honeywell would pass Bonilla back and pick up the fourth place finish with Bonilla coming home in fifth.

The story of the main event was one of a hard charging Falcone. After recording a DNF due to a knocked off front bumper in heat one, Falcone picked his way through the pack demonstrating patience and superb race craft on his way to a seventh place finish in the second heat. After picking up the holeshot down into turn one, McHattie lost the lead to Gafrarar in the turn six hairpin on lap one. McHattie would return to the lead on lap four as he took the top spot back in the turn 11 right hander. Mean while, Saturday winner Falcone was laying down fast lap after fast lap. Falcone drove aggressively on his way back to the front as he attacked the curbs in the turns seven, eight and nine esses. Falcone’s aggressive style proved beneficial as he ran down the lead pack. From there Falcone went to work on getting around Russell for the final step on the podium. With two laps to go, Falcone utilized all the braking power his Arrow chassis would allow as he dove to the inside of turn 11 and passed Russell for third place.

At the front, McHattie had pulled away from Gafrarar by several lengths. McHattie drove the final two circuits crisply as he picked up the main event victory ahead of Gafrarar. Falcone would showcase one of his best drives of the year, proving that his commitment to seat time and logging laps is the key to his success as he finished in third while Russell and Bonilla completed the top five.