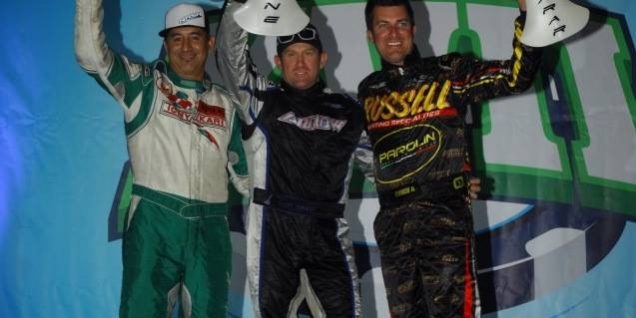 TaG Master has been the focus of tech tent controversy over the past few years, and it reared its ugly head again on Sunday. Ahead of detailing the post-race issues, the on-track battle was incredible and again displayed the tremendous level of competition in the class when it comes to the SuperNationals. The addition of three-time winner Leonardo Nienkotter (Kosmic) and Australian frontrunner Kip Foster (Arrow) simply heightened strength of the field, as did the star power of NASCAR’s Jamie McMurray (FA Kart), IndyCar’s Will Power (Arrow), and former SKUSA ProMoto Tour champion and Indy Lights race winner Bobby Wilson (Tony Kart).

Colorado’s Scott Falcone (Arrow) entered the day with a strong heat race point total to use in his bid for the Pro Tour title, so he had a lot on the line. Starting from the off-pole, Falcone was immediately in the hunt, sitting second to Foster. The opening laps of the race were thrilling, as Foster led early over Falcone before Power slipped through to pace a lap, following immediately by Falcone working to the lead. That said, the guys on the move were Wilson and Nienkotter, as they advanced into a heated six-kart battle up front.

Attrition ended up being a lead story line, as Wilson and Power were out on lap seven after a melee in turn five that put them both into the water barriers, and then the entire complexion of the race changed on lap 11 when Nienkotter made an aggressive move inside the leader (Falcone) in the right hand turn seven, as the subsequent contact put Falcone and Foster on the sidelines, as the Aussie was right there in fourth. After the dust had cleared, Jim Russell Jr (Parolin) found himself with the lead ahead of Ethan Wilson (FA Kart), who would take over the top spot a few laps later. The excitement level was turned up as former TaG Master Pro Tour champion Brian McHattie (Exprit) was a rocket coming through the field, knifing his way to third. Over the final handful of laps, McHattie closed, but it was too little too late, as Wilson crossed the line ahead of Russell to score his first SuperNationals victory. Ethan’s post-race interview with EKN’s Rob Howden was incredibly emotional, as the veteran driver’s love for the sport was evident, as was the prestige and importance he puts on the SuperNationals. All the other TaG Masters drivers in the scale line were extremely happy for Wilson, as he is a huge supporter of the category.

All this made the eventual DQ of Wilson’s engine a tough pill to swallow. The issue was with ignition timing, as it was McHattie’s motor, who was also removed from the results. Both engines were Rok TTs. This decision advanced Russell Jr. to the top of the podium, where he was joined by Paul Bonilla (Tony Kart) and Tino Donedeli (Top Kart). Nienkotter had continued after the incident and finished fourth ahead of Chuck Gafrarar (Parolin).

Despite the incident on-track, Falcone still had enough points to win the title, and he will run the #1 plate in the category in 2014, swapping spots with Bonilla while Gafrarar will remain as the #3 plate.