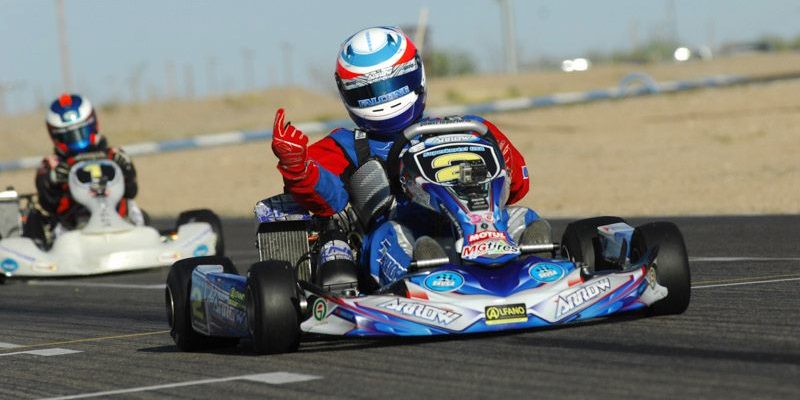 Making his Pro Tour TaG Master debut, Texan Mike Jones (Sodi Kart) set the tone for the weekend as he clocked in as the quickest driver in their opening round qualifying session. Jones edged out 2012 vice-champion Scott Falcone (Arrow) by 36 thousandths of a second, with a 50.728-second lap. Three-time SuperNationals winner Billy Cleavelin was third in the order, setting up for an interesting day.

Things were crazy to begin heat one as several false start attempts came and after they got going, a wreck in turn 11 brought out a red flag. Kurt Fisher (Tony Kart) made hard contact with the tire wall but walked away. Jones, during the opening corner was drove over and the fuel line was knocked off. Because of the red flag, he was not able to rejoin the field. Falcone took advantage and drove away to the win, stretching out to a three-second advantage. 2011 SpringNats double winner Brian McHattie (Exprit) took advantage of all the drama and drove to a solid second spot, keeping Cleavelin at bay. Mirko Mizzoni (Italcorse) was fourth in the order with Anthony Honeywell (Exprit) in fifth.

Falcone led the entire 10-lap second heat race, running consistent lap times to stretch out to a two-second advantage. The fight for second place helped as McHattie and Cleavelin went back and forth with the Mike Manning Karting driver edging out the DB Motorsports pilot. Honeywell ran solo in fourth with Kevin Manning (Vemme) putting in a great driver to fifth from 11th.

It was a 20-lap battle in the TaG Master main event, filled with attrition and tempers following the race. Falcone however left the race all smiles as he went green-to-checkered to sweep the day. In the end, Falcone had to keep up the pace to secure the victory as defending champ Paul Bonilla (Tony Kart) came charging at the end. The Full Throttle Karting pilot qualified fourth and was running second in the opening heat until dropping a tire and falling outside the top-15. He charged to sixth in the second heat race, but was shuffled back at the start of the Final. Like a man on a mission, he fought his way forward lap after lap and eventually was second. Falcone ran out to large lead and Bonilla cut into the gap. At the end, the distance was only a few kart lengths as the top two drivers from last year finished 1-2. The battle for the final podium position came down to the end with Mizzoni able to fend off a charging Jones, who completed a strong recovery from his heat one DNF, as Cleavelin completed the top-five.