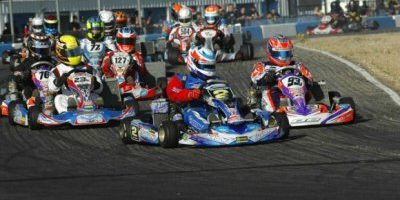 The two quickest drivers from Saturday’s main event returned the next day to lead the qualifying session on Sunday. Paul Bonilla (Tony Kart) set fast lap in the 20-lap final in round one, and came back to duplicate that in the timed session to begin round two. The Full Throttle Karting driver was a full two-tenths clear of Saturday winner Scott Falcone (Arrow). Billy Cleavelin (CRG) was third in the order as Brian McHattie (Exprit) and Anthony Honeywell (Exprit) completed the fast five.

Bonilla and Falcone walked away from the field in the opening heat race. Bonilla led the early portion but Falcone was able to slide past for the lead and the win at the end. The fight for third featured Cleavelin and McHattie going back and forth, with Cleavelin earning the position with McHattie fighting off a charging Mike Jones (Sodi Kart) in the final few laps.

Falcone got the jump as the lights went out to begin heat two with Cleavelin jumping past Bonilla for second early. The defending champ came back for second and ran down Falcone. Once there, Falcone would not allow him by and this in turn brought Cleavelin in closer as they reached the checkered flag. With no change in position, Falcone took the win over Bonilla and Cleavelin with McHattie and Honeywell completing the top-five. Jones was unable to leave the grid with a mechanical issue and forced to start the main event from the last position.

It was a two driver walk-away in the TaG Master final as the top two from a year ago went toe-to-toe for the Sunday victory. Falcone took advantage of the pole position and set the pace early while Bonilla was shuffled back to third behind Cleavelin. Bonilla needed three laps to work past the three-time SuperNationals winner to take second spot and set his sights on Falcone. Just one lap later, Bonilla drafted past Falcone for the lead and began stretching out a gap. With the fast laps of the race, Bonilla pulled out to a near three-second advantage by the 18th and final lap for his first win of the season. KartSport North America’s Falcone finished second to make the points battle more interesting heading to the SummerNationals. Cleavelin fell behind McHattie after Bonilla went by and then pulled off on lap seven with a flat left front tire. McHattie held the third spot comfortably until Honeywell, Mizzoni and Kevin Manning (Vemme) ran him down. The final few laps, McHattie fought off Honeywell and scored the final podium spot to make it DB Motorsports third and fourth. Manning was able to work past Mizzoni for the fifth position to recover from a DNF in yesterday’s main event.