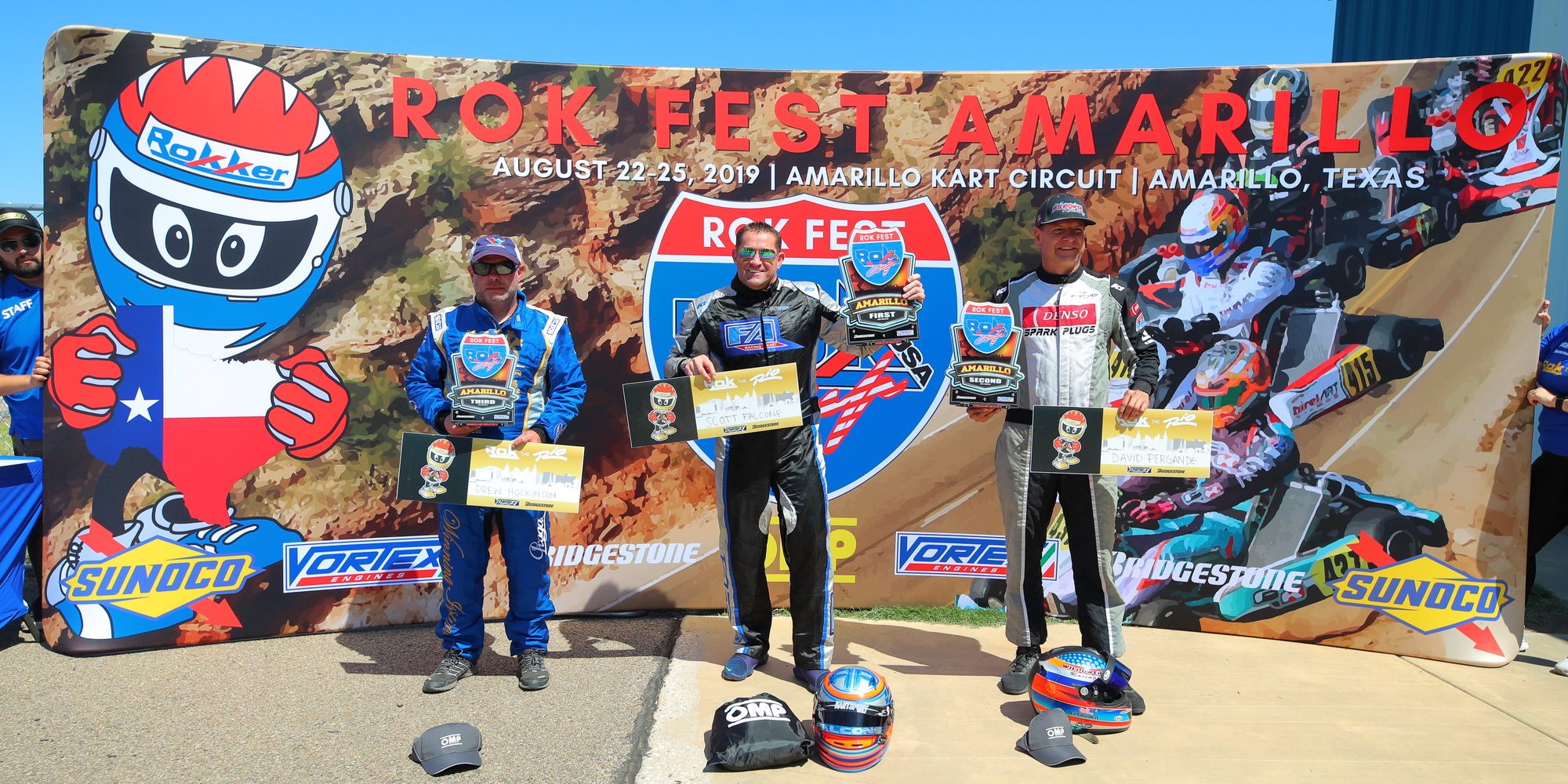 The culmination of the 2019 ROK Fest Amarillo took place on Sunday as the temperatures in North Texas continued to climb. With plenty of prizes to ROK the RIO on the line, drivers put all their efforts in driving their way onto the podium and reaping the rewards.

Continuing their battle into the Final, RPG teammates Ryan Norberg (Kosmic) and Jacob Gulick (Kosmic) went toe-to-toe in the ROK Senior Final. Norberg initially jumped out to a big lead, but faded in the middle stage of the race, allowing Gulick to close in on his bumper. The two traded the lead a number of times from lap ten to twenty before Norberg put the hammer down and secured the lead for good with four laps remaining. Gulick had to settle for second while Conrad Kraweic (Tony Kart) completed the podium in an uneventful drive to finish third. Daniel Fellows (Kart Republic) broke free of his Performance Kartsport teammates early on and secured fourth place while Sullivan Sherril (Tony Kart) outran Filip Niemkiewicz (Tony  Kart) for fifth.

In the ROK Masters race with the Senior ROK race, Scott Falcone (Kosmic) outlasted David Pergande (Tony Kart) and Drew Hockinson (Praga) for the win. All three earned tickets to ROK the RIO in Las Vegas.

There was no stopping Branyon Tiner (Kosmic) in the Junior ROK Final as the Texas driver led every lap of the grueling 24-lap main event and pulled out to a 4.8 second advantage when he crossed the finish line. It was a great recovery for Tiner, who missed out on Friday’s action and had to start Saturday at the rear of the grid. Taking home second place honors was fellow Texan Luke Lange (Tony Kart). Slotting in behind fast qualifier Liam Letzch (FA Kart) in the early laps, Lange waited until lap four to make his move, successfully overtaking and began to pull away from Letzch, who completed the podium. Macy Williams (FA Kart) and Deanna Hoffman (FA Kart) rounded out the top-five.

In the ROK Shifter Final, the stage was set for a proper Texas Showdown between Cameron Egger (Kosmic) and Hannah Greenemeier (Tony Kart). Egger got the jump off the line and took the early advantage while Greenemeier had to claw her way by Pierce Baldus (Formula K), who jumped by before corner one. It took nearly three laps, but Greenemeier finally got by and began closing in on Egger. At the halfway point, the two were bumper to bumper, patiently biding their time during the long Final and just as it appeared Greenemeier was going to push for the lead, Egger blistered off the fastest lap of the race with five laps to go to open a small gap. As the checkered came closer, the lead built and Egger celebrated the victory over Greenemeier. Bladus held on for third while Derek Proctor (Formula K) and Thane Morgan (SodiKart) crossed the line in fourth and fifth.

Next on the agenda for ROK Cup USA is their highlight event of the season, the second annual ROK the RIO in Las Vegas, Nevada on October 30 to November 2. Rokkers from all four corners of North America and around the world will converge on Sin City for a spectacular event on a temporary circuit laid out in the parking lot of the Rio All-Suites Hotel and Casino. Registration for the event is already open and can be completed at bit.ly/rio-reg.