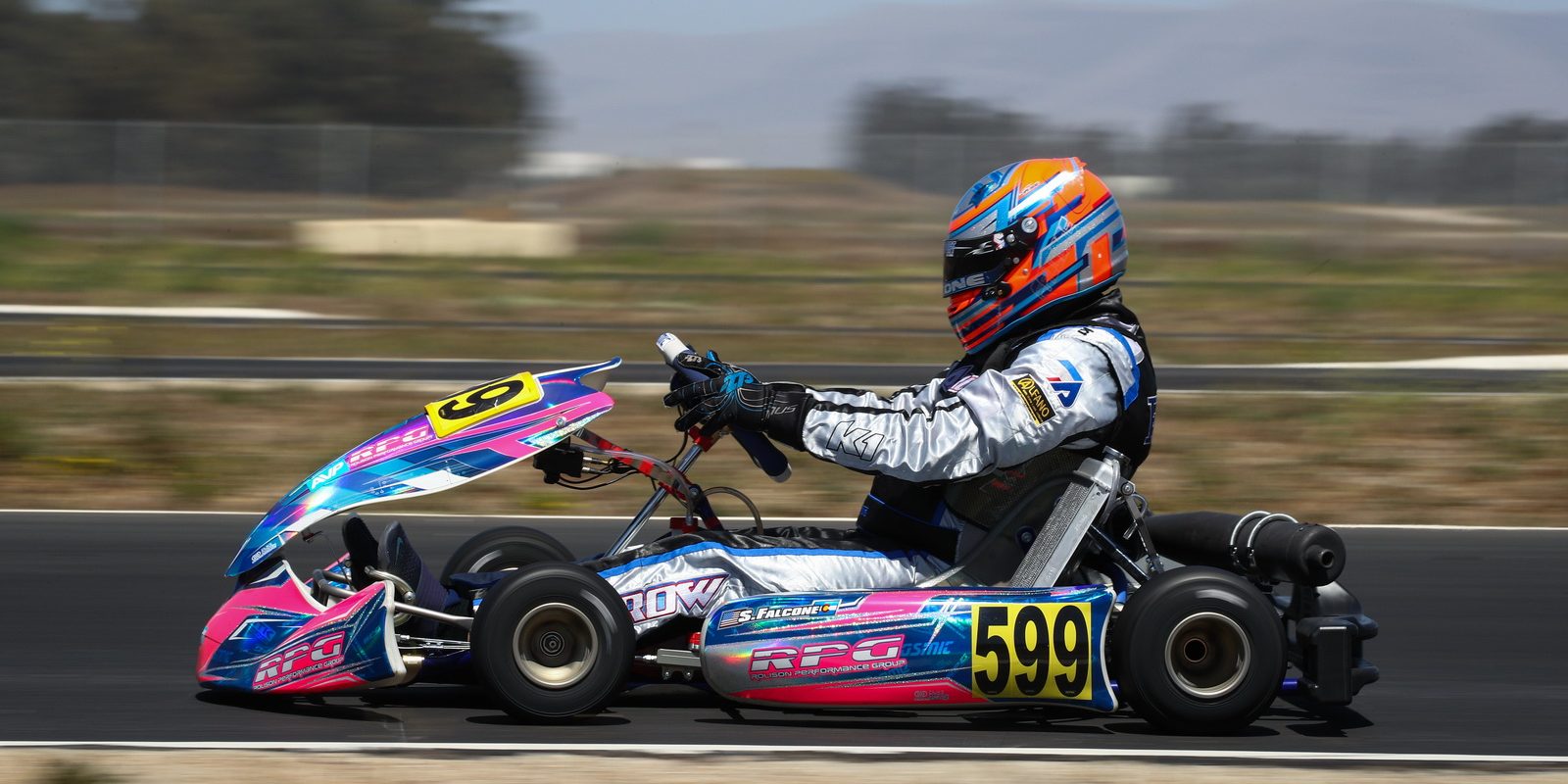 The fifth round of the California ProKart Challenge was contested on September 7-8 at the home of the Santa Maria Karting Association. The two-day event for the Superkarts! USA regional program took to the 7/10-mile ‘Nationals’ configuration. Despite some dust storms throughout the weekend, the weather was dry and sunny, allowing the 15 categories to continue their championship chases.

The most notable win streak going into the weekend was that of Billy Musgrave in the Croc Promotion USA/Mad Old Nut Pro Shifter category. Musgrave hit the double digits with victory at Round Four, and it seemed as if the streak would come to an end as the action played out in Santa Maria. The five-time series champion was unable to complete a lap in qualifying and came from the back of field in the Prefinal into second by lap five before retiring. Top qualifier Cody Hodgson led until Jake French took over for the win. Musgrave started ninth in the race group and worked his way up to second and past Hodgson until the two made contact. Musgrave was able to continue on, falling back to seventh and trailing French by more than six seconds. With fast laps of the race, Musgrave cut into French’s advantage and took over the top spot prior to the white flag. Holding on up to the checkered flag, Musgrave secured his 11th straight victory. French settled for second, with Hodgson in third.

While not a streak, Ryan Norberg became the first two-time winner in Rolison Performance Group X30 Senior class. The four-time SKUSA Pro Tour champion swept the round to put himself back into the championship chase. Norberg edged out Jacob Gulick and point leader Billy Musgrave by 99 thousandths in qualifying before leading all 14 laps in the Prefinal. In the Final, Norberg went unchallenged to lead all 25 laps for the victory ahead of Musgrave and Gulick. Defending champion Joseph Daniele was fourth with Joey Brienza placing fifth.

All five of the remaining shifterkart divisions had win streaks continue. Emon Fazlollahi scored his second straight, third of the season in the Musgrave Racing Company Pro Shifter 2 division. It was a near sweep after securing fast time in qualifying. However, Connor Robles edged him out for the Prefinal win. Robles led the majority of the Final until Fazlollahi took control late in the race to claim the victory. Robles remained close, finishing second with Anthony Freese in third. John Crow won his fourth race of the season, third straight in Alpinestars G1 class. Crow swept the day over Carl Lewis.

Josh Pierson was able to take over the championship lead in the Nash Motorsportz X30 Junior division with his third victory of the season. Pierson completed a sweep of Round Five, clearing the field by nearly two tenths in qualifying before fighting hard to win the Prefinal. He would be able to go on and lead all 25 laps of the Final, never putting a wheel wrong to earn his second straight victory. Jonathan Portz posted fast time in his runner-up performance, as Maximilian Opalski was able to edge out Brent Crews for the third spot. Blake Nash completed the top-five.

Pierson was going for his fourth straight in the Allen Berg Racing Schools KA100 Junior class, running into a very competitive field in Santa Maria. He was second in qualifying behind Jacob Yesnick, who picked up his best qualifying performance of the season. Pierson took over the point in the Prefinal and led until he retired with two laps remaining. Brent Crews assumed the lead and scored the win. Crews led the opening few laps of the Final until he retired on lap four. Logan Toke, making his second start of the season, became the leader until a charging Pierson reached the front. Pierson took over the lead on lap 12, leading the remainder of the race to cross the line as the provisional winner. Pierson, along with another driver, were penalized 10 seconds for cutting the track. The fight for second came down to the wire with contact involved coming to the checkered. Cole Schroeder was second on-track, penalized five seconds for avoidable contact. All of this put Toke on top of the podium with his first victory in the category. Ethan Lampe was classified second, with Stephen Eisert in third. Pierson and Caleb Shrader rounded out the top-five.

It was a third victory on the season for Oliver Calvo in the Doran Motorsports Group KA100 Senior division. Michael Michoff, making his first start of 2019, set the pace through qualifying and the Prefinal. Henry Falls-Hand jumped out to the lead at the start of the Final, leading the first seven laps until Calvo took over. From there, Calvo was able to lead the remainder of the race for the victory. Michoff slid up to second with fast laps of the race and put the pressure on Calvo late, coming up 19 thousandths short at the checkered flag. Aiden Kempf rounded out the podium, with Nick Persing fourth and Luis Perez in fifth.

The International Kart Federation-sponsored KA100 Master division welcomed its largest field of the season with nine drivers taking part. Two-time winner Mike Smith was the lone driver to dip below the 51-second mark in qualifying before Nick de Graaf, making his first start of the season, earning the win in the Prefinal. de Graaf went unchallenged in the Final for his first victory in the category, as Smith drove from the tail of the field to second after a DQ in qualifying. Ron Jenkins was third with Robert Perez and Josh Buttafoco completing the top-five.

The battle in the Empire Karts X30 Master class was one of attrition. Championship leader Brett Harrelson set the pace in qualifying, only to retire early in the Prefinal. That allowed former SuperNationals winner Billy Cleavelin to claim the top spot and win in the Prefinal. Cleavelin would lead the first 11 laps until he retired, handing the lead over to a returning Scott Falcone – former SKUSA Pro Tour champion. Round One winner Steve Martin would outlast Falcone in the remaining laps, earning his second victory on the season. Falcone was runner-up in his return, with Harrelson back up to third. Jon Persing earned his second straight in the AiM Sports X30 Super Master category. Bob Bigiogni grabbed his second straight fast time in qualifying before Persing won both the Prefinal and Final. Bigiogni was runner-up, with Jeff Rice in third.

Next to Musgrave, Jesus Vasquez Jr. has a five-race win streak in the Ace High Designs Mini Swift class. It was his fourth straight sweep of the year, leading all 34 laps on the day after securing fast time in qualifying and in the main event for a perfect score. Izaac Gutierrez drove to second, with Ryan Persing in third. It was the G3 and ‘GT’ show in the IAME USA West Micro Swift class. G3 Argyros set the fast time in qualifying before defending champion Graham Trammell won the Prefinal. Trammell led the majority of the main event with Alex Mercado in the mix. Argyros was able to work past both, going from third to first on the final circuit to record the victory, his first on the year. Trammell settled for second with Mercado in third.

The California ProKart Challenge will conclude the 2019 season in just two weeks as the series finale is set for September 28-29. The 11th edition for the Streets of Lancaster Grand Prix is hosting the sixth round of the California PKC championship series. The two-day street race is among the most popular events of the season, welcoming drivers from all over the country and featuring the headline categories racing under the lights Saturday evening in front of hundreds of spectators. For more information on anything related to Superkarts! USA, please visit the website – www.superkartsusa.com and be sure to follow the Superkarts! USA Facebook page, Twitter and Instagram accounts.